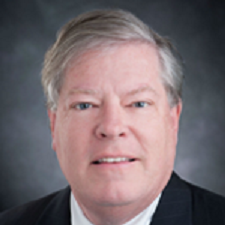 Mark R. Elam, a Columbia native, earned joint degrees in Government and International Studies and Economics from the University of South Carolina. He received his Juris Doctor degree from the USC School of Law and clerked for Judge Dan F. Laney Jr. Elam became counsel for Attorney General Dan McLeod in the Criminal Division and represented the State Medical and Dental boards and the Ethics Commission.

Elam later moved to Washington to become minority counsel to the US House Committee on Standards of Official Conduct (Ethics), where he advised and investigated members of Congress for ethical violations. He became the legislative director and tax counsel for SC Congressman Carroll A. Campbell, who later became governor. Elam continued to serve as the governor's general counsel and chief of staff and as general counsel, executive vice president for Government Relations and as acting president of The American Council of Life Insurers. Elam later served as director of State Government Relations for Honeywell International and as an executive with Boeing South Carolina.  He recently retired from Boeing.

Elam was appointed the chair of the Sc Board of Health and Environmental Control by Governor Henry McMaster and confirmed by the SC Senate in May of 2018.

Information for Board Members