The graphic below is an illustration of the typical components of a public drinking water system that uses groundwater. 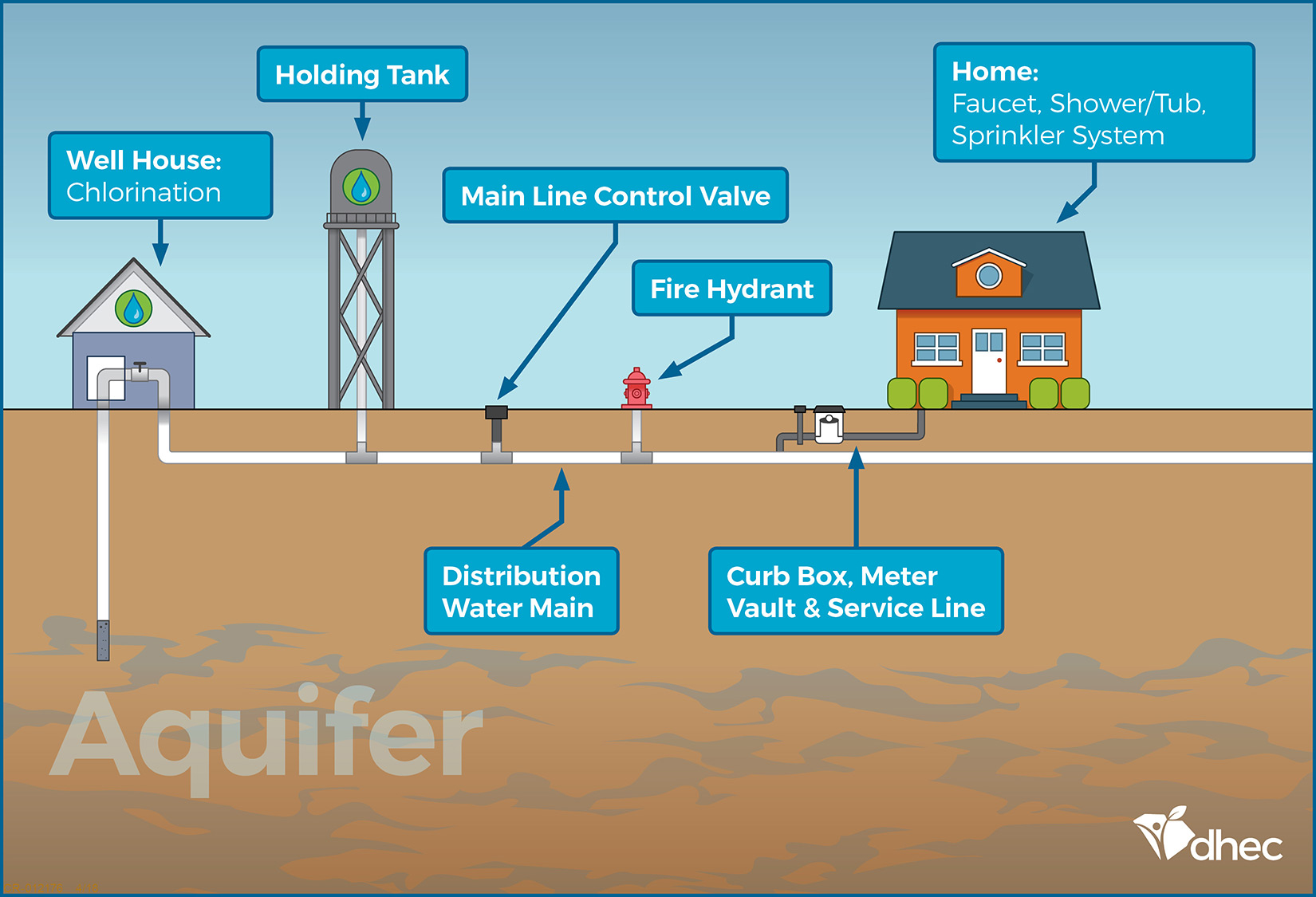 * DHEC performs a sanitary survey of the City’s drinking water system on an annual basis.

The purpose of a sanitary survey is to evaluate a public water system's ability to provide a continuous supply of safe drinking water to its customers.

The City uses DHEC compliance data to develop their Consumer Confidence Report (CCR) which is required by the Safe Drinking Water Act. The CCR tells where drinking water comes from and lists the regulated contaminants detected in treated water and the level at which they were found for the preceding calendar year.

The City of Denmark Public Water System is required to publish notice of its CCR in a local newspaper and make the CCR report available upon request at City Hall.

Note: CCRs prior to 2014 can be obtained from the City of Denmark.

The results for Denmark's compliance and supplemental oversight sampling can be found on DHEC's Drinking Water Watch page.

DHEC coordinated with the Bamberg District Two school district to conduct water sampling for lead levels as requested at the community meeting which DHEC hosted on April 5, 2018. DHEC staff collected samples at Denmark-Olar Elementary School on April 12, 2018, and Denmark-Olar Middle School on April 19, 2018.

All results from both schools were less than the EPA’s lead action level of 0.015 milligrams per liter (mg/L).

In response to concerns expressed by some customers during a DHEC community meeting on April 5, 2018, the Department agreed to work collaboratively with statewide partners to perform a special sampling study of the water quality of the four public wells serving the City.

The University of South Carolina (USC) Arnold School of Public Health, USC Department of Chemistry and the Edisto Riverkeeper (with support of the SC Rural Water Association) joined DHEC as partners in the study. Partners collected samples at the same locations and times but used independent laboratories to perform analysis and prepared independent reports for comparison.

This study incorporated independent analysis of samples of untreated (raw) water and treated (disinfected) water collected at the well house of each of the four public wells: Cox Mill, Voorhees, Acacia Street, and West Voorhees. Each sample from each location was analyzed for pH, bacteria, chlorine residual, lead, iron, and manganese.

Findings of the DHEC study were that:

All three partners sampled together and had similar results.

Any citizen who would like to share concerns about water quality and/or request sampling in his/her home is asked to contact our DHEC Regional Office in Orangeburg.

This webpage will continue to be updated with new information as it becomes available.