Of the individuals tested for TB, there are currently no test results indicating active TB disease.

As of this update, the testing totals associated with the school stand as follows:

Information resulting from this investigation will be provided as it is confirmed, and in accordance with state and federal law.

DHEC has confirmed a case of tuberculosis (TB) in someone associated with the Carolina Forest High School in Horry County. DHEC is working closely with school leaders to identify members of the school community who may have been exposed and need TB testing. This process is called a "TB contact investigation." DHEC has communicated this information to parents and staff and will continue to keep the school community updated on next steps. DHEC is evaluating the school layout and routine activities of the case to determine the level of risk for classrooms, lunchrooms and other areas where the students and staff congregate.

It is important to note that TB can be treated with antibiotics. DHEC will update this web page throughout the investigation as information becomes available. 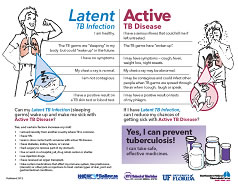 Tuberculosis (TB) is a bacterial disease found primarily in the lungs. It is spread from person to person by sharing the air space in a confined area for a prolonged period of time. Individuals who have tuberculosis in their lungs cough the bacteria into the air and others become infected by breathing in the bacteria. These individuals may develop latent TB. Individuals with latent TB are infected with the TB germ but they cannot infect others. Without treatment for latent TB infection, approximately 10 percent of the individuals who become infected will develop active tuberculosis disease sometime in their lifetime. The remaining 90 percent of the individuals with latent TB carry the bacteria for a lifetime without developing the disease.

Is there a treatment for TB?

Yes, TB is treatable using a prescribed course of antibiotics. TB disease can be treated by taking several medications for 6 to 12 months. It is very important that people who have TB disease finish the medicine, and take them exactly as prescribed. If the medications are stopped too soon or not taken as directed, TB germs that are still alive may cause illness or become resistant to the medications.

During a potential TB exposure, DHEC will complete a contact investigation to identify everyone who may have been exposed. DHEC TB staff will evaluate exposed individuals for signs of illness, and provide treatment if indicated for individuals that are infected with TB and at risk of developing disease.

During a contact investigation, trained public health staff determines which individuals have been exposed by visiting all the environments where the person with TB has been, and evaluates each site to determine how the air was circulated and how long they spent in each place.

Individuals who have been around the person with TB disease for an extended period of time are at risk of being infected with the TB germ. Our TB staff have identified those individuals, and they have been notified of their possible exposure and need for testing. If you have not been advised to undergo testing, we do not believe you to be at risk of exposure at this time.