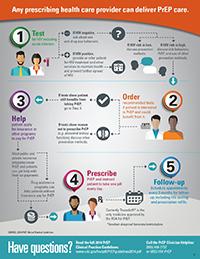 This CME activity can be completed through Medscape, and is intended for primary care physicians, ID/HIV specialists, nurses, and public health & preventive medicine specialists. The goal of this activity is to discuss the use of PrEP in the primary care setting, including patient assessment and management, CDC guidelines, and tips for incorporating this into practice. Requires free Medscape log in.

CDC has released a 2017 update to the clinical practice guidelines for PrEP. The new guidelines

The guidelines recommend that PrEP be offered to people who are HIV-negative and at substantial risk for HIV.

For sexual transmission, this includes anyone who 1) is not in a mutually monogamous* relationship with a partner who recently tested HIV-negative, and 2) is a

For people in HIV-discordant couples where one sexual partner is HIV-positive and the other is HIV-negative. PrEP can be especially useful when the HIV-positive partner is not taking antiretroviral medications or does not have an undetectable viral load. Health care providers should also discuss the use of PrEP with HIV discordant heterosexual couples during conception and pregnancy as one of several options to protect the partner who is HIV-negative.

Patients on PrEP should return to their health care provider every 3 months for a repeat HIV test and other follow-up. At this time, the provider can write a prescription refill, offer to counsel about medication adherence and risk reduction, test for STDs if necessary, and assess side effects.

PrEP is only for people who are at ongoing substantial risk of HIV infection. For people who need to prevent HIV after a single high-risk event of potential HIV exposure—such as unprotected sex, needle-sharing injection drug use, or sexual assault—there is another option called postexposure prophylaxis or PEP. PEP must begin within 72 hours of exposure. See our PEP guidelines at https://www.cdc.gov/hiv/pdf/programresources/cdc-hiv-npep-guidelines.pdf.

* Mutually monogamous means that you and your partner only have sex with each other and do not have sex outside the relationship.

The guidelines are based on strong evidence from clinical trials of PrEP use in high-risk populations. All participants in these trials received pills containing either PrEP or placebo (a pill without any medicine in it), along with intensive counseling on safe-sex behavior, regular testing for STDs, and a regular supply of condoms.

In all of these studies, HIV transmission risk was lowest for participants who took the pill consistently. Specifically: