On June 29, 2022, two significant actions were taken by the South Carolina Department of Health and Environmental Control (DHEC) to address the undesirable levels associated with the New Indy facility

- Correspondence to New Indy Regarding the Pollution Control Act Order - The letter requires New Indy to install a new primary stripper in addition to maintaining the existing stripper as a backup.

- Signed Consent Order with New Indy Regarding the Wastewater Permit Violations - The consent order requires the facility to take swift actions with established deadlines to correct its wastewater violations and bring its operations back into compliance with all applicable wastewater treatment laws and regulations.

This consent order resolves one of the four ongoing regulatory actions between New Indy, DHEC and the U.S. Environmental Protection Agency (EPA). The three forthcoming actions include the (1) EPA’s finalization of its 303 Order, (2) EPA’s Clean Air Act compliance determination, and (3) DHEC’s Pollution Control Act order to correct undesirable levels of odor stemming from the plant’s operations.

The goal of these detailed and extensive efforts is to ensure New Indy is fully compliant with the state and federal regulations its required to adhere to; thereby mitigating the ongoing odor issues and ensuring the plant’s operations do not negatively impact nearby homes and communities.

DHEC has created a form to gather specific information that will aid in our ongoing odor investigation. Community members and their observations are valuable assets in our investigation. Below is an example map of odor reports that provided complete location and time details.

Many variables affect the number of odor reports during a time period. The main variable is wind direction and whether or not people are upwind or downwind from New Indy. 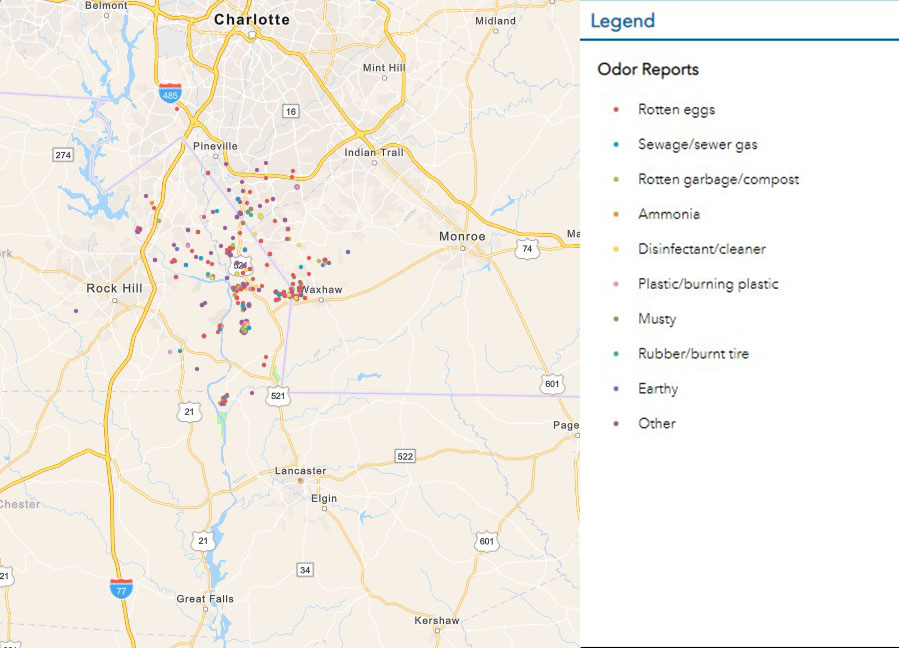 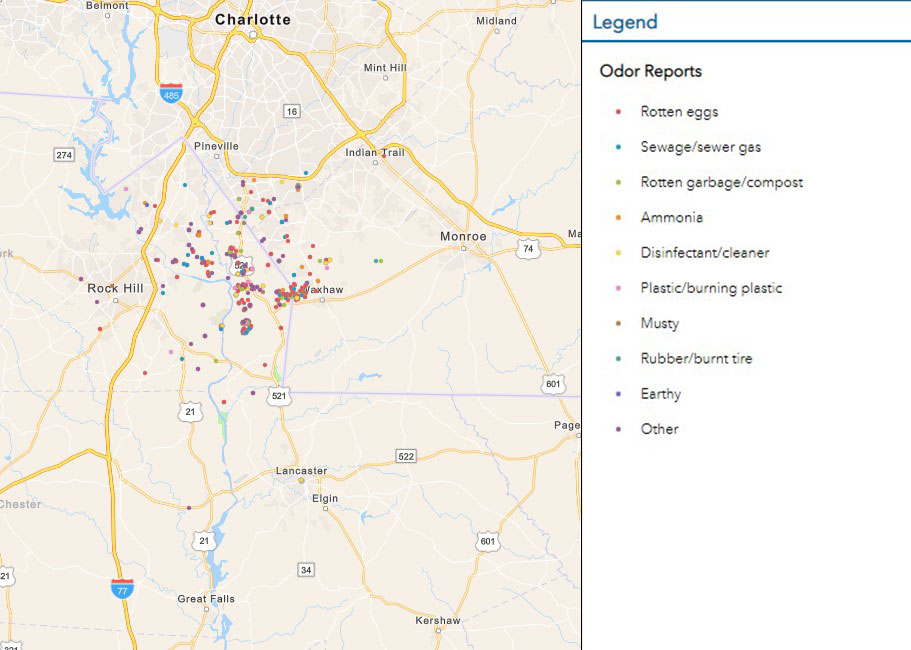 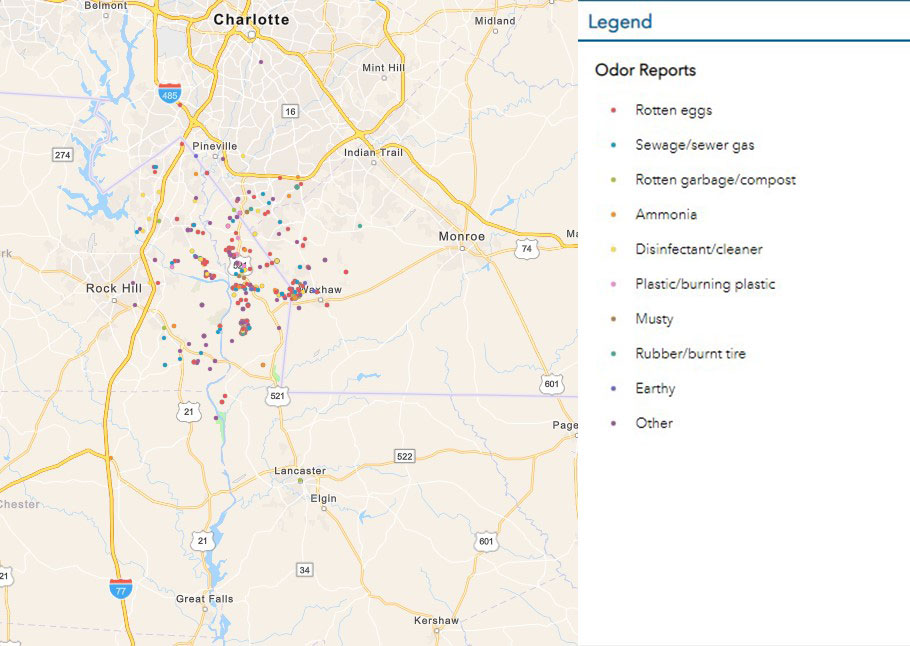 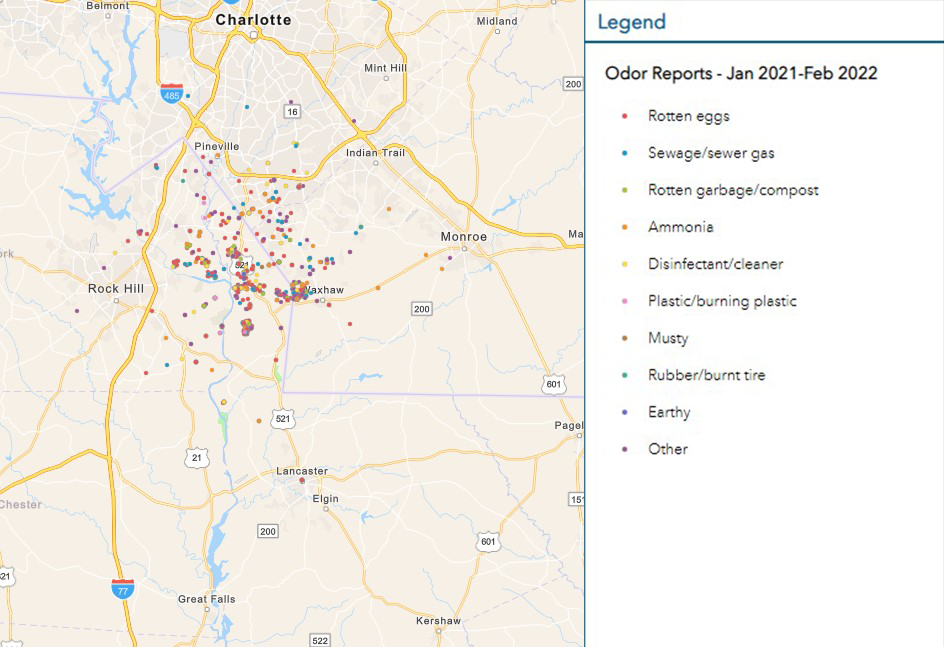 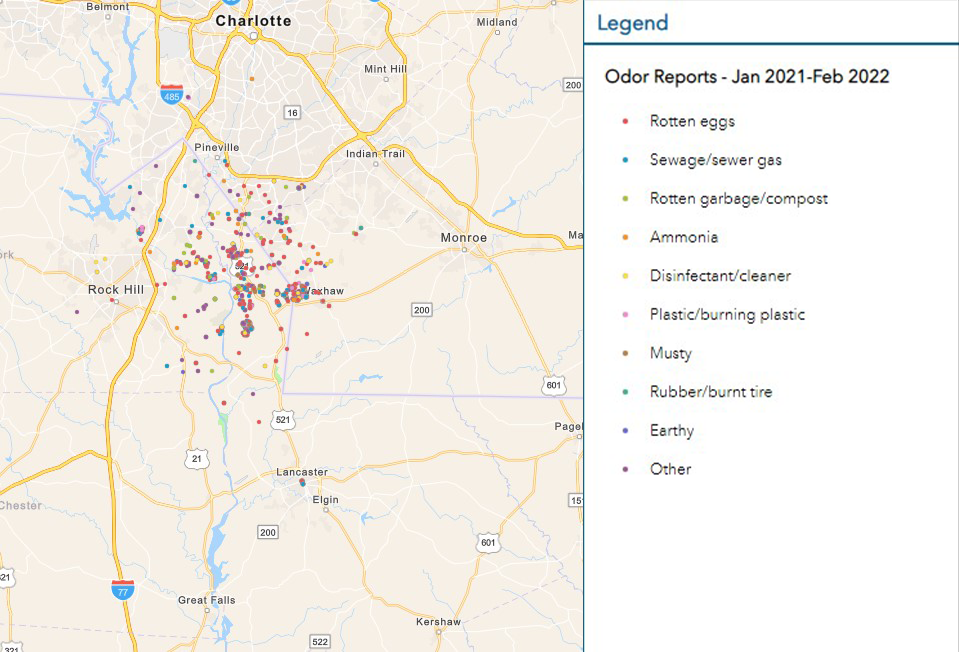 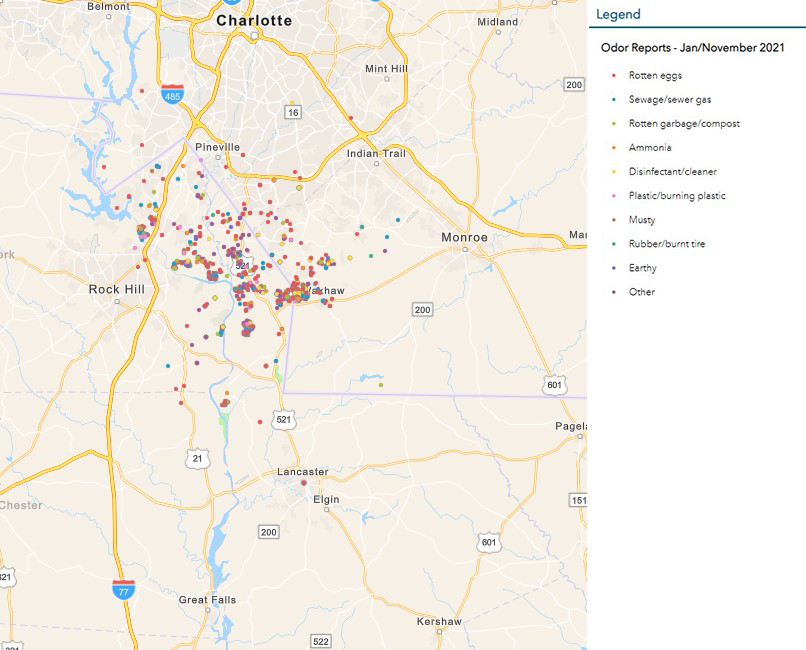 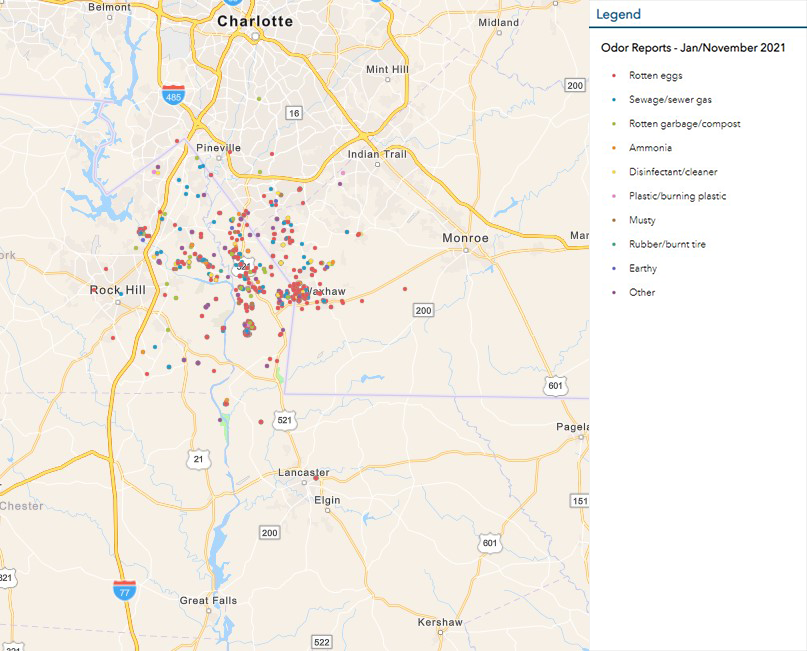 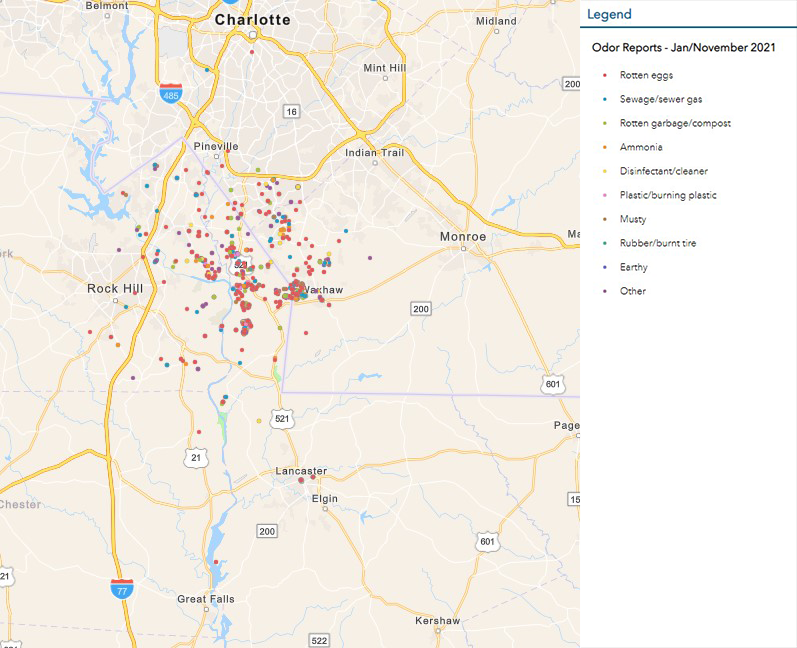 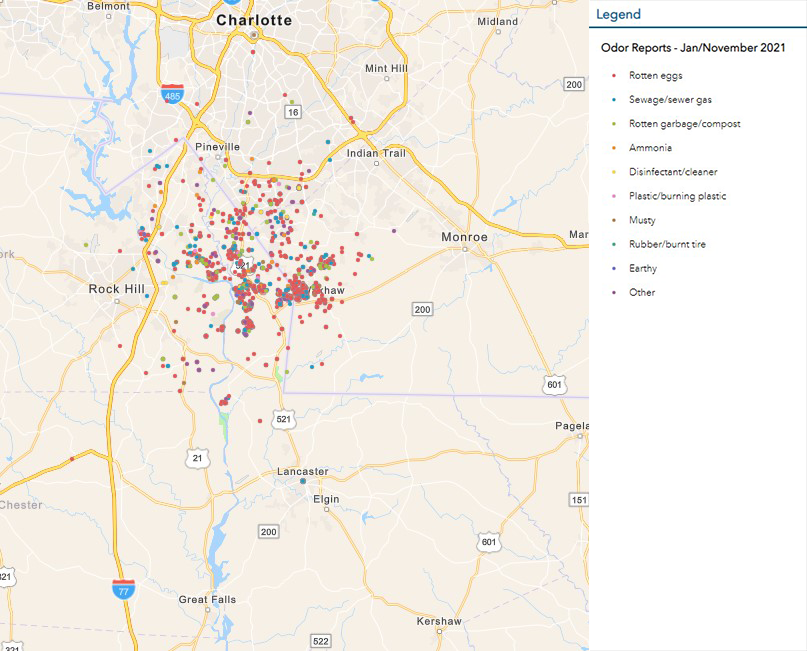 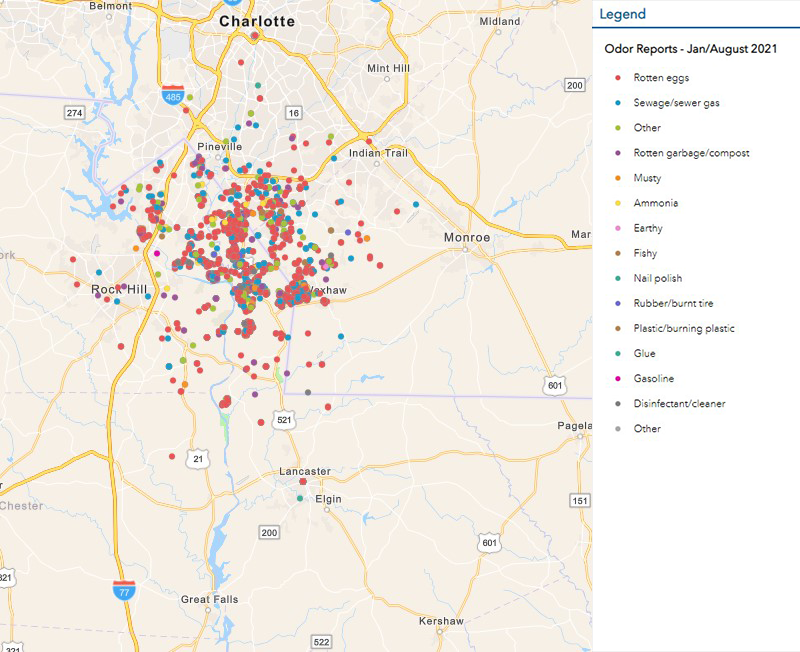 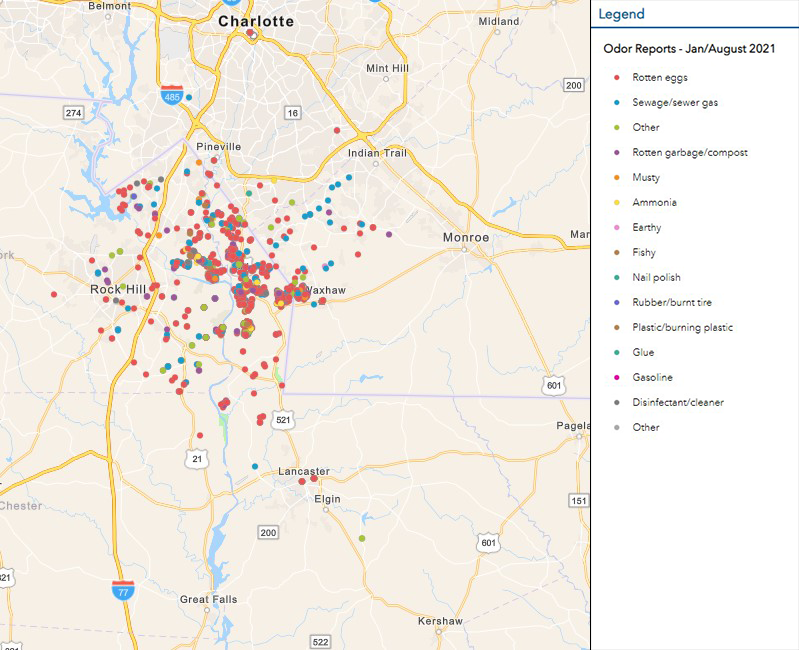 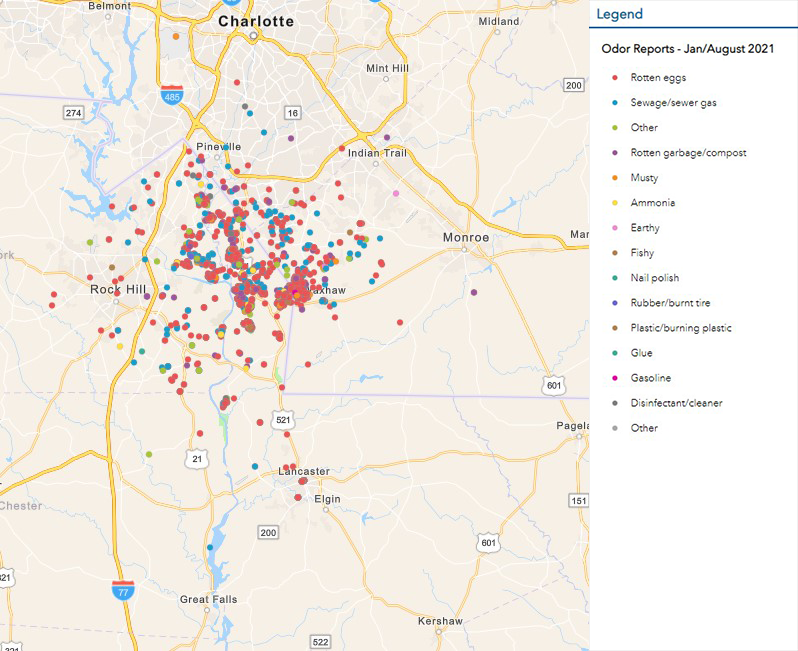 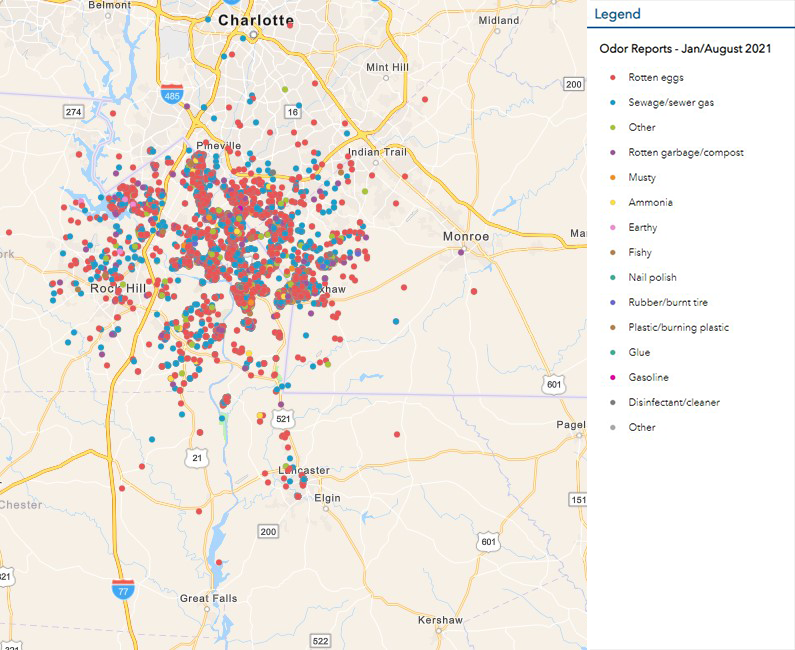 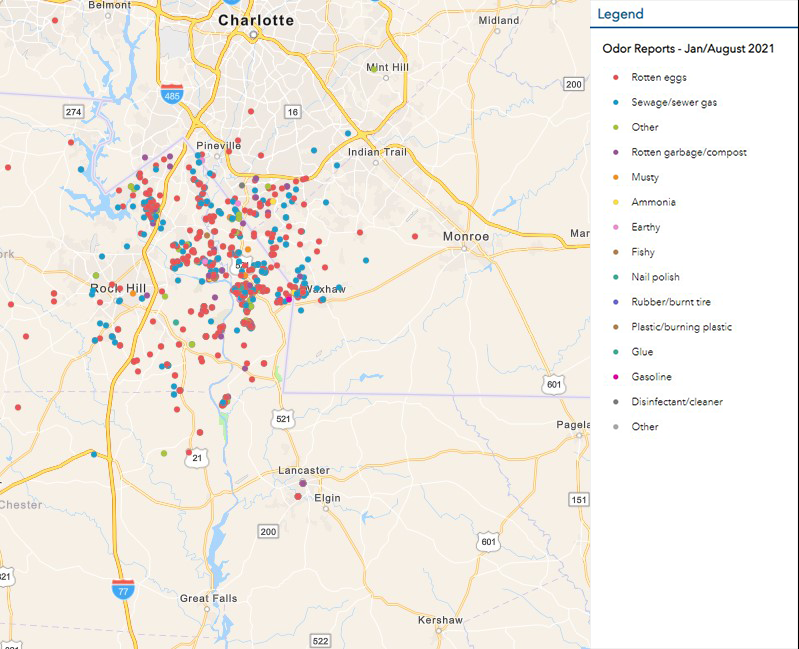 We have used citizen reports that include time and place along with local wind speed and direction data to follow air parcels back in time to recreate the path that air has taken. Called back trajectories, and modeled by our meteorologists during a range of conditions, they help identify where parcels of air have been and the potential sources along those paths. Many of the back trajectories that have been modeled indicated that air associated with odor reports previously passed over or near the New Indy plant.

As part of DHEC’s investigation, we evaluated permitted facilities in the area, including the New Indy Containerboard facility and nearby wastewater treatment plants, which also have a distinctive odor. The reports that describe the results of these inspections are provided here.

To assist in the investigation and ongoing response, DHEC requested resource assistance from the US EPA:

On May 13, 2021, EPA issued an Order to address the endangerment posed by the air emissions of hydrogen sulfide.

Sulfur odors come largely from decaying organic matter - especially when decaying organic materials are concentrated in one area like a wastewater treatment plant, land application of organic fertilizer and certain industries like pulp and paper mills. The pulp and paper industry is known for its distinctive smell. This smell comes from the decay of wood, which releases naturally occurring sulfur compounds, as well as a sulfur-containing chemicals used in the pulping process.

Sulfur-containing chemicals are often detected by the human sense of smell in very low concentrations and have an unpleasant odor, sometimes similar to rotten eggs. These chemicals can be smelled at concentrations much lower than those associated with being harmful to health. Odors of any type can trigger symptoms such as headaches and nausea, and  the sense of smell is subjective to each individual. There are no state or federal odor regulations applicable to South Carolina.

Methyl mercaptan, a sulfur containing compound, is added to natural gas as an odorant so that leaks can be detected. If your home has gas appliances or gas heating or gas fireplaces and you smell gas inside your home that is not also outside of your home, you should leave the home and call the gas company or 9-1-1.

DHEC takes odor concerns very seriously and remains committed to providing information to those affected by these odors. Community members and their observations are valuable assets in our investigation. Data from citizen odor reports has been and will continue to be used to inform the investigation.

DHEC provided a form for community members to contribute details of their odor observations to assist in our investigation.

DHEC and local partners continue to work to resolve this concern. Please check this webpage frequently as it will be updated as additional information about the odor investigation becomes available.