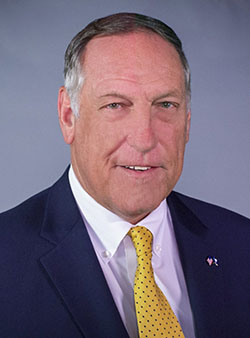 J.B. Kinney, a native of Sumter, earned an associate degree in Business Marketing from Sumter Technical College, a B.A. in Psychology from Coker College and a M.Ed. in Personnel Services from Clemson University.

Kinney was one of the first state employees licensed as a long-term health care administrator in 1978, during his tenure with the South Carolina Department of Disabilities and Special Needs (SCDDSN) at Whitten Center in Clinton. He continued his work in the public sector as administrator of the Lancaster County Care Center from 1981-1984.

Most of Sonny's private sector experience was as senior vice president of Operations for National Healthcare Corporation (NHC) in the South Carolina Region where he developed and directed operations for the company's 19 healthcare facilities and pharmacy.

Kinney retired in June 2018 after 34 years with NHC and currently resides in Kiawah Island with Carol, his wife of 44 years. They have two adult daughters and five grandchildren.