What are some of the most common exposures of/to radiation?

Most radiation comes to us from the sun and from cosmic radiation - so that people at higher elevations like Colorado and adjacent Rocky Mountain States receive more than those who live at sea level. However, a lot of radiation also comes from the soil and rocks around us. Granite and marble have background levels of radioactivity. A relatively small additional amount comes from our man-made technology. 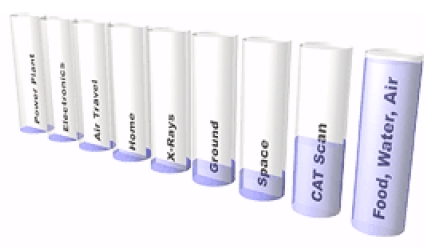 No. No effects have ever been observed at doses below 5,000 millirem (5 Rem) delivered over a one-year period. In fact, effects seen when humans are exposed to 100,000 millirem (100 Rem) over a short time period are temporary and reversible. It takes a short-term dose of well over 500,000 millirem (500 Rem) to cause a fatality.

For more information on radiation and DHEC's role in response, contact: