The SC Department of Health and Environmental Control's Office of Ocean and Coastal Resource Management, in collaboration with the Charleston Chapter of the Surfrider Foundation and Folly Green, implemented a Cigarette Litter Reduction Pilot Study on Folly Beach in Charleston County, South Carolina. The project, funded by the National Marine Sanctuary Foundation and the National Oceanic and Atmospheric Administration (NOAA), was designed to enhance awareness and promote proper disposal of cigarette litter on the beach. 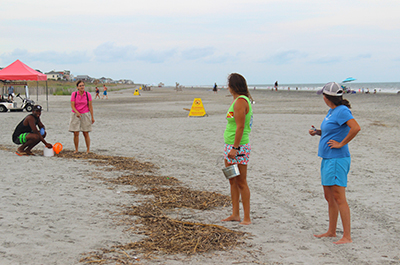 Cigarette butts are a toxic form of marine debris. Careless beachgoers discard cigarette butts directly on the beach, while storm sewers and waterways transport littered cigarette butts from upstream locations. Most cigarette filters are made of thin plastic fibers called cellulose acetate , a material that degrades very slowly . Plastics exposed to sunlight and waves break down into smaller and more numerous microplastics, which may never fully degrade in the marine environment .

Birds, fish, and sea turtles may ingest cigarette butts or other plastic debris along the coast, which can lead to choking, poisoning , or blockage of the gut. 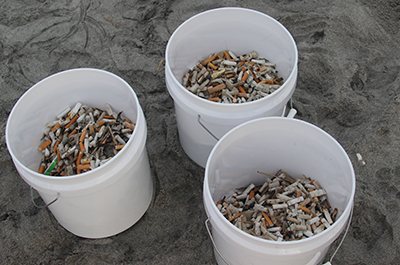 Over 6,500 cigarette butts were removed from the beach during the 2015 monitoring events

Leaching of toxic materials from cigarette butts can also degrade water quality. Various metals, including lead and nickel , have been found to leach fromsmoked cigarettes within 24 hours, which may increase the risk of acute harm to local marine life. In a laboratorystudy, a concentration of one cigarette butt in one liter of water killed half of all fish exposed, within 96 hours.

This project involved targeted education and enhancement of cigarette litter disposal options. Additionally, cigarette litter monitoring occurred on Folly Beach in 2015 and 2016. Details on the project strategy are provided below.

In late January 2016, the team installed 15 new cigarette receptacles at select walkover locations to encourage proper disposal of cigarette litter. These "cannons" are made of sturdy PVC material and include an opening just 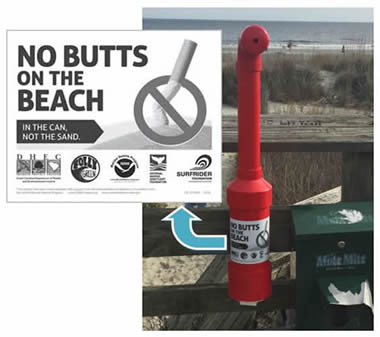 wide enough for cigarette butt disposal . Look for these receptacles at the following walkovers:

The team designed educational materials including flyers and foldable beach ashtrays to increase public awareness and encourage proper disposal of cigarette litter. These materials were distributed at businesses on Folly Beach from June through September 2016.

Monitoring was conducted in September 2015 and 2016 to compare the amount of cigarette litter found on the beach before and after implementation of the project strategy. During these events, volunteers collected and counted cigarette butts along a 0.25-mile section of beach near the Folly Beach Fishing Pier. In both years, two monitoring efforts were planned (pre- and post-Labor Day) to also determine the impact of a holiday weekend on cigarette litter. For each event, a rate of collection was calculated by dividing the number of cigarette butts removed from the beach by the number of person-hours involved in the effort. This rate (cigarette butts collected per person-hour) was used to compare monitoring events. Monitoring summaries are provided below. 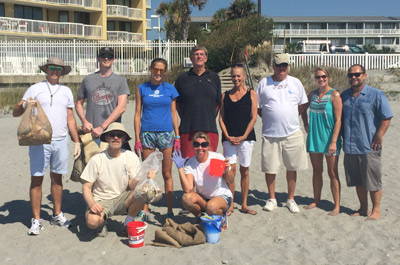 Volunteers assisting with the 2016 monitoring event

2016 Monitoring: After Implementation of Project Strategy

Two monitoring efforts were planned for September 2016. A pre-Labor Day event was scheduled for September 2nd, but was cancelled due to Tropical Storm Hermine. As a result, only one monitoring event occurred in 2016, which was held on September 6th, the day after Labor Day. During this event, the calculated rate of collection was 427 cigarette butts per person-hour. The effort resulted in an estimated total of 2,860 cigarette butts removed from the beach.

A comparison of the post-Labor Day results from 2015 and 2016, shows that approximately 200 fewer cigarette butts per person-hour were collected in 2016. The 2016 collection rate is also lower than the average collection rate of the 2015 pre-and post-Labor Day efforts by approximately 60 cigarette butts per person-hour. While there are a number of factors that influence the number of cigarette butts encountered on the beach on any given day, including tidal and weather conditions, these monitoring results suggest that the upgraded receptacles and the targeted education may have contributed to an overall decrease in the quantity of cigarettes butts collected in the study area.