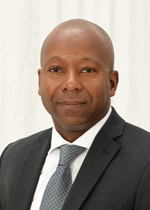 Marcus Robinson serves as Chief Human Resources Officer for the South Carolina Department of Health and Environmental Control (DHEC). In this position, he oversees the Office of Human Resources and is responsible for all aspects of DHEC's human resources policies, objectives and initiatives.

A retired command sergeant major in the U.S. Army, Robinson joined DHEC in 2015. He brings more than 30 years of distinguished service in personnel management and recruiting to the agency. Prior to joining DHEC, Robinson served as the installation city manager on one of the largest bases in the Army. He led the installation to a 2014 Bronze and 2015 Silver Community of Excellence Award. His emphasis on energy conservation training resulted in a 10 percent annual decrease in consumption, leading to an Army Energy and Waste Management Award.

Robinson holds a bachelor's degree in human resources management from Post University in Waterbury, Connecticut. He was selected as a Kentucky Colonel, the highest title of honor bestowed by the Commonwealth of Kentucky, in recognition of his noteworthy accomplishments and outstanding service. He is also a member of the Big Brothers Big Sisters of America nonprofit organization and a Riley Institute Diversity Fellow at Furman University.