What is lung cancer?

The lungs are spongy organs in the chest that bring air into the body through special airways. Lung cancer occurs when cells in the lungs or the airways of the lungs grow out of control. Cancer cells within the lungs may grow into surrounding tissues or spread to other parts of the body.

Symptoms of lung cancer may include: persistent cough, blood in sputum, chest pain, change in voice, and recurrent respiratory infections.

Lung cancer is the most commonly diagnosed cancer and the leading cause of cancer death among both men and women in South Carolina, as well as nationally. 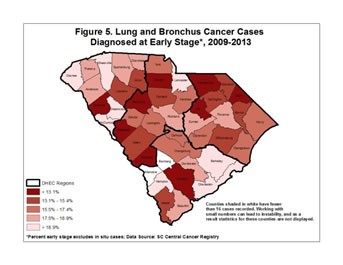