Environmental investigations and monitoring have been conducted at the Westinghouse site since 1980. These investigations have included groundwater, surface water, soil, and sediment assessments and, as a result, have generally defined where contamination is, where it is not, and where it is moving to. DHEC and Westinghouse entered into a Consent Agreement on February 26, 2019, to make a renewed effort to fully characterize all contaminants and possible sources throughout the site and then determine what additional cleanup might be necessary.

Work to investigate, delineate, monitor and clean contaminated groundwater was first initiated at Westinghouse in the early 1980’s following a fish kill in a pond located on the site. Elevated levels of fluoride and ammonia nitrogen were detected in water in the pond as well as in groundwater adjacent to the pond. The wastewater treatment system ponds were identified as the source of the contamination. This resulted in Westinghouse being required to routinely sample permanent groundwater monitoring wells and report those results to DHEC. This monitoring and reporting has continued to this day. Westinghouse also routinely samples surface water, vegetation and fish tissue, and makes the data from those results available to the NRC inspectors.

Westinghouse re-lined four of the six wastewater ponds between December 2008 and February 2012 to further limit the ability of wastewater contaminants to enter the groundwater.

All of the data to date shows groundwater contamination is limited to areas adjacent to the southern side of the plant building and between the wastewater ponds and Upper and Lower Sunset Lakes (a portion of Mill Creek).

There have been no known off-site impacts from operations or environmental contamination at the Westinghouse site.

On July 24, 2018, Westinghouse notified DHEC that a leak had occurred from a Hydrofluoric Acid Spiking Station inside the plant building and the station was immediately shut-down upon discovery. The leak contained hydrofluoric acid (a very strong acid) and uranyl nitrate (a uranium salt). A small area (about 3-inches in diameter) of concrete below the equipment was found to be damaged. Soil sampling indicated that the leaked chemicals had seeped into the soil beneath the spiking station. To determine the extent of this leak, Westinghouse developed a soil sampling plan to test the area beneath the building where the leak occurred.

Based on the sample results, Westinghouse removed all soil below the spiking station to a depth of 9 to 11 feet and filled the excavation area with clean concrete. Groundwater was not encountered with this release and cleanup.

Based on current information and data received by DHEC, there is no immediate threat to residents from the June 2018 leak. The release was confined to a small area of the site and the general public was not exposed to the leaked chemicals.

Leaders within the Hopkins-Lower Richland communities have organized several public meetings and formed an oversight committee. DHEC remains in contact with these leaders and other interested residents, elected officials, and local organizations to offer assistance and information.

DHEC staff also participated in community meetings held on August 13, 2018, at the Hopkins Park Adult Activities Center and on August 20, 2018, at the Lower Richland Sheriff’s Substation.  These meetings provided an opportunity for concerned residents to ask questions about the leak and hear answers from DHEC, Westinghouse, and the NRC. During these community meetings, DHEC committed to testing the water quality of private wells at homes of local residents who expressed concerns.

In response to concerns voiced by the community, DHEC tested the water quality of 13 private drinking water wells in the Hopkins-Lower Richland communities, as well as the Hopkins Community Water System, to check for any impacts from contaminated groundwater at the Westinghouse facility. DHEC samples were tested for the following: Metals and minerals; bacteria (total coliform and E. coli); volatile organic compounds (VOC’s) such as petroleum products and solvents; and radioactive materials (radionuclides). None of the contaminants known to be at Westinghouse facility were detected in the samples.  The results confirmed there are no off-site impacts to private drinking water wells from the Westinghouse facility.

In addition to DHEC's private well sampling, Richland County tested 61 more private wells in the area for uranium and no uranium was detected in any of these wells.

Click below to download data tables which outline results from the 13 private drinking water wells and the Hopkins Community Water System. 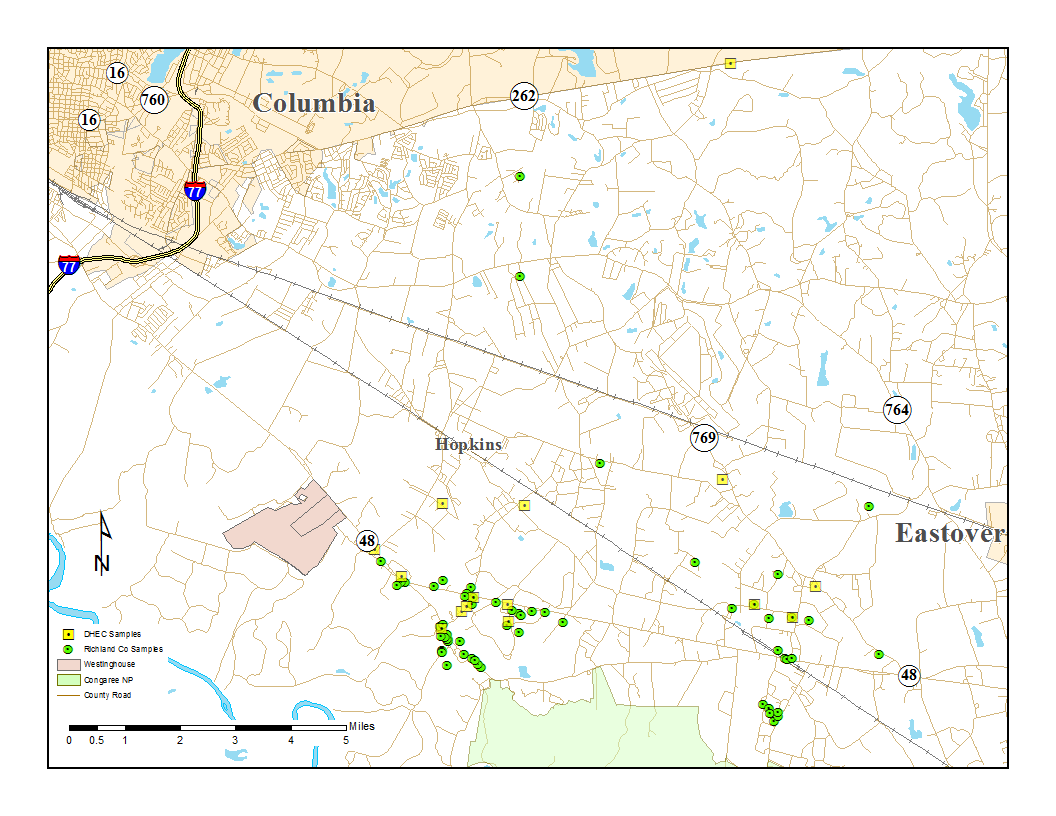