A hurricane is the most severe category of "tropical cyclone" - a general term for all circulating weather systems over tropical waters. When the winds of a tropical cyclone reach a constant speed of 74 miles per hour or more and the storm has a well-defined counterclockwise circulation, it is called a hurricane.

Hurricane winds blow in a large spiral around a relatively calm center known as the "eye." The "eye" is generally 20 to 40 miles wide, and the entire storm may have a diameter of 400 miles across. A hurricane can bring torrential rains, high winds, and a storm surge as it nears land. A single hurricane can last more than two weeks over open waters and can run a path across the entire length of the eastern seaboard. More detailed information about tropical storms and hurricanes can be found at the National Hurricane Center's website.

Hurricanes usually occur between June 1 and November 30. Each year, on average, ten tropical storms (of which six become hurricanes) develop over the Atlantic Ocean, Caribbean Sea, or Gulf of Mexico. Many of these remain over the ocean. However, about five hurricanes strike the United States coastline every three years. Of these five, two will be major hurricanes (category 3 or greater on the Saffir-Simpson Scale). For information on how hurricanes are named, visit Worldwide Tropical Cyclone Names.

Tidal surge or storm surge is an abnormal rise of sea level along a shore, primarily resulting from the winds of a storm. The graphic below demonstrates the increase in tidal surge with the corresponding storm category. For more information regarding storm surge and hurricanes, please visit NOAA's website.

The areas of vulnerability depicted on the map below indicate areas where people may be ordered to evacuate due to tidal surge hazards. If you do not live in the areas indicated below, you may still be vulnerable to flooding and high winds. 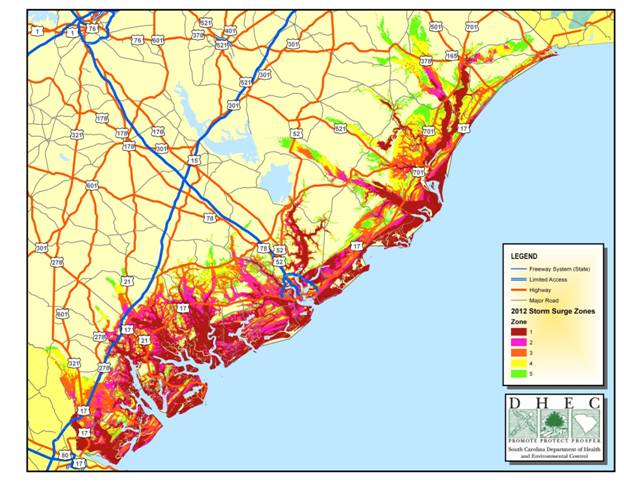